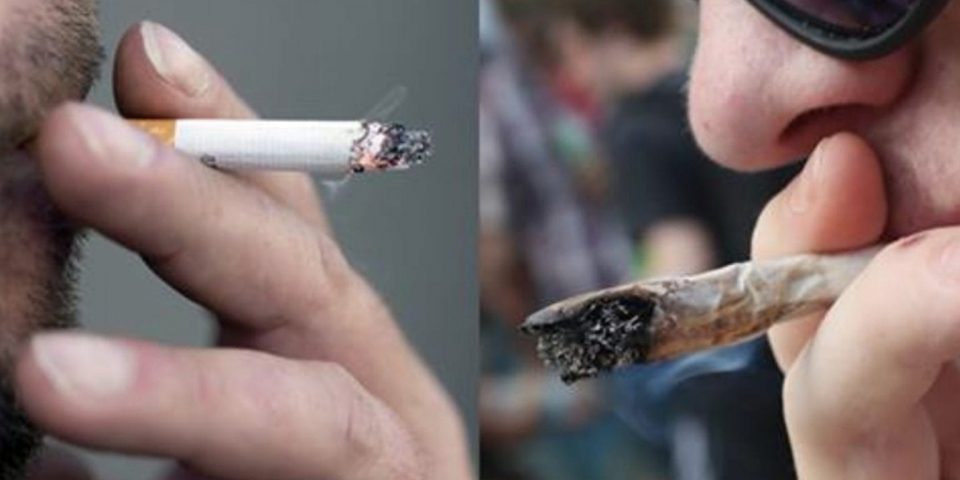 Nowadays, everyone knows that cigarette smoke is harmful and tobacco companies have stopped trying to tell anyone otherwise. However, there is still a long-running debate over whether inhaling cannabis smoke is really as bad for you as inhaling tobacco smoke. But does the science back this hypothesis up?

Cannabis Smoke and Tobacco Smoke: Are they different?

As any serious doctor or health care worker will tell you, inhaling smoke is – in a strictly medical sense – not 100% great for your body.

So, is weed smoke less dangerous than tobacco? Before delving into this question, let’s be clear that inhaling any smoke into your lungs – or any substance besides fresh air – can cause damage to the sensitive tissues of your alveoli over time and other health issues. Over the long term, heavy use of any inhalant can lead to negative consequences and cannabis is no exception.

As you inhale the burnt plant matter, the combusted plant matter and terpenes hit your alveoli and are absorbed directly into your bloodstream. The nicotine in tobacco or the cannabinoids in weed are then carried swiftly carried to the brain, where they release neurotransmitters such as dopamine to create positive feelings.

However, while you’re feeling good, you aren’t noticing the small, ragged bits of carbon, tar, and other chemicals that are left in your throat and lungs. Over time, these chemicals can cause a number of health problems, including cancer. There is a wide chasm separating what those particulates and tars contain and what they do to your lungs when it comes to weed versus tobacco though.

What’s in Cannabis and Tobacco Smoke?

Tobacco smoke contains around 7,000 harmful chemicals and up to 70 carcinogens. Some of that is due to the additives and other chemicals tobacco companies add to their cigarettes during curing and processing. These additives make them more enjoyable to smoke – and by a “total coincidence” more addictive as well. Even the most naturally grown and cured tobacco still contains around 40 carcinogens, making it a little better but not by much. Also, the nicotine alone will constrict blood vessels and can cause a host of health problems over time, including coronary issues.

Cannabis smoke also contains carcinogens, but strangely the damage to the lungs and body seems to be offset. Studies have shown minimal impact on lung function as far as lung capacity goes, and the rates of lung cancer amongst long time pot smokers is nearly equal to the average for non-smokers. All this despite the fact that on average, pot smokers hold the smoke in their lungs four times as long as a cigarette smoker. While scientists aren’t quite sure why this is, there are plenty of theories.

Some scientists speculate that cannabis consumers may have healthier lungs because, on average, most people that consume marijuana don’t smoke the same amount as cigarette smokers. While there are high amounts of use in medical patients, especially those with chronic pain, smoking a bowl here and there throughout the day does not compare to a pack-a-day cigarette habit.

Others speculate that the cannabinoids may have some type of anti-inflammatory effects on the lungs which may limit the smoke’s damage. Cigarette smoke, on the other hand, inflames the alveoli and damages the cilia, the small hair-like structures in the throat that help to clear out contaminants. Cannabis and CBD may also have some effect on hindering the growth of cancer cells, although this also remains mostly anecdotal at the time.

What’s Best For My Body?

There is nothing better for your body than not inhaling any smoke at all. Weed smoke still contains a plethora of chemicals and particulate matter. Long term use of cannabis can lead to a condition known as chronic bronchitis. While this is not as severe an issue as long term smoking of tobacco can cause, you are still stuck with a cough that won’t go away. There’s also wheezing, shortness of breath, and extra phlegm to deal with, which results from the inflammation of your bronchial tissues. Even in this situation, THC is still considered less harmful to your body than nicotine, and used much less frequently due to its longer effects and lack of addictive properties. A study conducted by the Harm Reduction Journal even showed that cannabis and tobacco smoke are not equally carcinogenic.

If you’re thinking of using cannabis but don’t like lighting up or just want to try something else, there are many alternatives to smoking weed that are just as effective. More people than ever are turning to cannabis for medical reasons, meaning options that don’t involve smoking are relatively common and readily available for people who want to use it recreationally too. These alternatives can come in handy if you’re traveling and don’t want your car to smell like herb or you’re at an event where you want to be able to consume discreetly.

Depending on the legal situation of cannabis where you live, some of these options might require a little extra effort. That being said, regardless of your home base, with some creativity, you’ll be able to use cannabis without needing lighters, papers, blunt wraps, or pipes ever again.

Edibles are another extremely popular way to bypass some of the issues associated with smoking cannabis. Edibles are any kind of food made with cannabis or a cannabis product. Some of the most common types of edibles include brownies, cookies, and cupcakes, but you can essentially infuse almost any meal with cannabis.

Most edibles are made with either oil or butter that has been used as a solvent to extract the essential cannabinoids and terpenes from dried cannabis flowers and leaves. Whereas smoking or vaporizing allows you to experience the effects of cannabis almost instantly, cannabis edibles can take a while to take effect. This is because they essentially have to pass through your entire digestive tract, being absorbed mainly in the intestines.

This process takes time, which is why it can take up to an hour (if not more) to begin feeling the effects of a cannabis edible. However, they are a completely smoke-free way to enjoy cannabis, which is great for anyone looking to avoid the risks of inhaling cannabis smoke. One major downside to edibles is that it can be extremely difficult to calculate your dosage, especially when they are homemade.

Vaporizers are specifically designed to heat cannabis and/or other herbs or concentrates to the optimal temperature to extract their essential compounds (in the form of an inhalable vapor) without actually burning them.

They work on the principles of convective or conductive heating; the first works by heating the product in the the chamber of the vaporizer to a point where it’s essential compounds start to be extracted.

Some countries ban the sale of Vapes, but not their possession, while others ban nicotine-containing liquids. The strictest countries are the ones who forbid- or at least strongly frown upon – everything from the sale and import to the use of the devices altogether.

Tinctures are one of the best options for people who don’t like smoking but want to enjoy the benefits of cannabis daily.  Also known as “green dragon” or “gold dragon,” cannabis tinctures are cannabis extracts made with an alcohol base or MCT oil.

They are also incredibly easy to use, fast-acting, and odorless. They’re usually ingested sublingually, but can also be applied to your favorite drinks or meals, too. Tinctures are a much easier way to control dosage, especially in comparison to edibles, among other alternatives to smoking weed.

Experiencing muscle aches and pains? CBD ointments, oils, gels, and other topicals, once applied to the skin, can help create relief for a multitude of irritants that happen throughout the human body—and they can be ordered online. Topicals generally do not penetrate the bloodstream and therefore do not produce any psychoactive effects, even if they contain psychoactive compounds like THC.

Instead, topicals work by activating CB2 receptors around the body. Trans-dermal cannabis patches, however, are able to reach the bloodstream and may produce psychoactive effects if they contain enough THC.

Cannabis capsules are available with THC and CBD. Much like tinctures, capsules are incredibly convenient for controlling dosage, with different strengths available.

However, be sure to use with caution. Some CBD products contain minuscule amounts of tetrahydrocannabinol (THC), the compound in cannabis responsible for creating a psychoactive high. If you expect to take a drug test shortly, results might turn up positive for cannabis use.

While there aren’t many specific studies comparing the two, through examination of the evidence at hand cannabis seems to be the less harmful option. However, moderation is important with everything and cannabis is no different. Heavy marijuana use can lead to lung and throat issues, but far less severe than the issues from smoking cigarettes.

Also, it goes without saying that if you have never tried smoking cigarettes, don’t start.