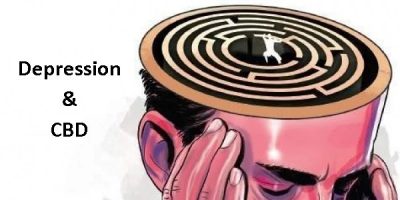 In India, the National Mental Health Survey 2015-16 reveals that nearly 15% Indian adults need active intervention for one or more mental health issues and one in 20 Indians suffers from depression. It is estimated that in 2012, India had over 258,000 suicides, with the age-group of 15-49 years being most affected.

If you suffer from untreated depression, we urge you to seek professional support. However, recovering from depression is highly individual — and better results come with a combination of approaches, including holistic lifestyle changes and self-care regimen.

A growing number of people are using cannabidiol (CBD) products to assist in recovering from depression. If you’re considering adding CBD oil to your self-care routine, we’ve put together this article to help you understand the current scientific research about CBD and depression. Although clinical trials are lacking, there is good evidence that it could help your brain recover from depression.

Many people still believe that depression is caused by a chemical imbalance — a serotonin deficiency. But this is a myth perpetuated by pharmaceutical advertisements. Serotonin is definitely part of the big picture — but the struggle is still out about who could use more or less serotonin, and depression is linked to many other neurotransmitter imbalances.

With so many different avenues leading to depression, it’s no surprise that there is no single miracle cure for it. What ends up helping a person recover from depression is highly individual, and people who take a multi-pronged approach to recovery often have better results than those who depend on a single solution.

Although SSRIs cause an immediate spike in serotonin levels, it can take weeks before mood improves. So serotonin levels aren’t directly responsible for healing from depression.

It turns out that when people suffer from depression, a specific region of the brain can atrophy and even shrink — the area responsible for memory, learning and emotion (known as the hippocampus).

Fortunately, this unique part of the brain is also capable of recovering. It can grow new neurons and form new connections — a process called “neurogenesis” or “neural regeneration.” Research has since revealed the ability of our brains to change throughout our lives — an ability named “neuroplasticity.”

The real reason antidepressants work is that they actually stimulate neural regeneration in the hippocampus. This could be why antidepressants take weeks to kick in — brain neurons need time to heal, grow and form new connections. If this is news to you, that’s because the cutting edge of depression research right now is hippocampal neurogenesis.

What we’ve learned so far is that although antidepressants can help to stimulate neural regeneration, a wide variety of other lifestyle choices and supplements can also help with this process.

Cannabidiol recently gained FDA approval as a cannabis-derived drug to treat epileptic seizures. According to researchers, the major reason it works for seizures is that CBD protects neurons in the hippocampus — the exact brain area that is atrophied in depressed people — and there’s interesting evidence from both animal and human research:

Clues that CBD Could Help with Depression

It’s one thing to prove that CBD helps protect and grow neurons (which it does) — but proving that it can be useful for treating a disease as complex as depression will be difficult. Although large-scale human trials are not available yet, some preliminary evidence is promising:

Growing Your Brain Toward the Light

Depression is a mental trap. And it takes time and patience to rewire a depressed brain. If you suffer from depression, then harmful mental patterns can be reinforced by everything from your own thoughts, to imbalanced neurochemistry, to unhealthy neural connections. You might need support in all three of these categories to find a lasting recovery.

Although molecules (including CBD) can help your brain circuitry grow and form new connections, you’re still in charge of what types of new connections are made.

CBD is not a first-line depression treatment, although you might find it useful as part of a long-term recovery plan. If you’re in the middle of a crisis or considering suicide, we urge you to call a hotline or seek professional support. Also, talk with your doctor before incorporating CBD into your self-care routine, especially if you take prescription drugs with potential interactions.