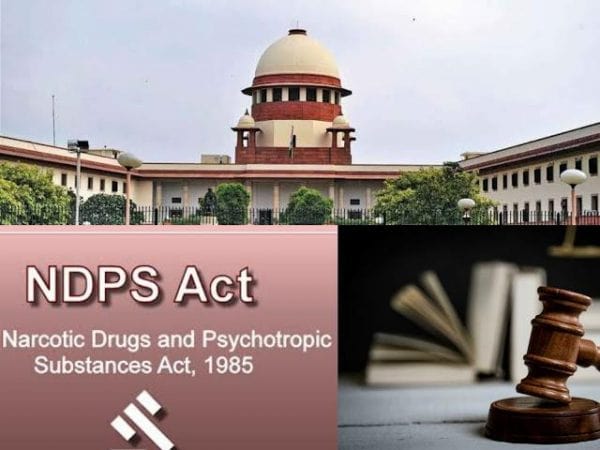 The NDPS Act or Narcotic Drugs and Psychotropic Substances Act, 1985, is the primary legislative instrument prescribing different forms of control on the use of narcotic drugs and psychotropic substances in India.

The Narcotics Drugs and Psychotropic Substances Act, 1985 defines itself as “An Act to consolidate and amend the law relating to narcotic drugs, to make stringent provisions for the control and regulation of operations relating to narcotic drugs and psychotropic substances [to provide for the forfeiture of property derived from, or used in, illicit traffic in narcotic drugs and psychotropic substances, to implement the provisions of the International Convention on Narcotic Drugs and Psychotropic Substances] and for matters connected therewith”.

Not very lucid, isn’t it? I read it thrice to understand the definition entirely.

Let’s break down the act and try to understand its history and all the confusion behind it, in a simple tongue.

NDPS Act came into force on 14th November 1985. It was notified in the Gazette of India by the Government of India as a special act. It contains five chapters. Since its inception and enactment, the act has been amended thrice till date (in 1988, 2001 and 2014). The law applies to the whole of India.

The act aims to control and regulate operations related to narcotic drugs and psychotropic substances such as cannabis (hemp) and its derivatives like Ganja, Charas, medicinal marijuana, or medicinal hemp, coca derivatives, opium derivatives, poppy straw derivatives, and other such items.

Now, how does the NDPS Act affect Economic Growth and Medical Advancements in our Country?

Hemp and its derivatives have several therapeutic uses like protecting the brain against inflammation and reducing the risk of cardiovascular diseases.

However, even when the whole world is awakening to the Cannabis revolution and welcoming the benefits of the plant, India remains stringent about its conceptions.

The health benefits of cannabis are more far-reaching and radical. The medicinal use of cannabis includes in the treatment of pain or inflammation, weight loss, sleeping disorders, nausea, muscle spasms, tremors, numbness from nerve damage, fluid pressure in the eye from glaucoma, and many other conditions.

There are various studies which have shown that cannabis has large industrial applications such as its use as biodegradable plastic, fibers, paper, clothing, food, textiles, insulator, and animal feed.

US states like Colorado and San Francisco have recorded billion-dollar revenues from Cannabis trade on an annual basis. Colorado reached the $500 million mark in total state revenue from cannabis trade in three and a half years and doubled the revenue source in under two years.

Therefore, it is evident that a blanket ban on the use of cannabis is a bottleneck to economic growth as well as for the medicinal advancements.

The Confusion & Bottlenecks Created by the NDPS Act, 1985

India has a vast and rich literature of cannabis in the Vedas and Upanishads. However, the NDPS has taken the definition of cannabis directly from the UN Single Convention on Narcotics Drugs 1961.

The ancient texts mention cannabis as one of the five essential plants, along with soma and barley. According to the Vedas, cannabis is part of our medicinal and spiritual culture.

In Ayurveda, cannabis was used to improve memory, fight against leprosy, and many other things.

The confusion is created by the following fact:

It is that the leaves and seeds of cannabis are not considered as contraband.

Also, the act specifies the meaning of cannabis as-

#1 Charas as the resin extracted from the cannabis plant.

#2 Ganja as the flowering or fruiting top of the plant.

#3 Any other mixture of two sanctioned forms of marijuana.

Therefore, the act permits a person to drink bhang or smoke pot if he can prove that it was only seeds or leaves of the cannabis plant that he consumed.

To get a better picture, let’s understand what narcotic drugs and psychotropic substances are according to the NDPS Act.

The Department of Revenue of India explains and categorizes the manufacture of narcotic drugs as follows:-

#1 Drugs whose manufacture is wholly prohibited.

These can be also be manufactured after obtaining a license from the Government but under exceptional circumstances. Section 2 of the act defines “psychotropic substances.” Cannabis, hemp, and derivatives fall under this section. Furthermore, they are naturally occurring plants. Therefore, their manufacture cannot be controlled as they occur naturally.

There are three categories of psychotropic substances according to the act:

#a Psychotropic substance whose manufacture is wholly prohibited as listed in Schedule I of the law.

#b Psychotropic substances whose manufacture is permitted but only for export

#c Psychotropic substances which can be manufactured for sale in India or export and are not listed in Schedule I and III of the NDPS Act, 1985.

One can produce these only after obtaining a license from the State Drugs Controller under the Drugs and Cosmetics Act and Rules.

While the laws on chemical-based hard drugs are robust, the ones on cannabis are rife with bottlenecks.

How is it possible that it is readily available to most of the youth in the country through illicit means?

Why is the Government licensing Bhaang shops?

What does the government have to say about revenues generated from such businesses in festivals like Holi and Shivratri?

Legalization will not only help curb the drug menace (trading at par with legalized cannabis economies) but also allow economy and medicine to evolve generating huge revenues and saving countless lives.

It is ironical to see that the US is increasingly opening to Marijuana and hemp while India sits with its ears closed.

Because it was the pressure from the US that led to the NDPS Act in the first place.

Before 1985, no legislation existed in India concerning control on narcotics. An early documented endeavor was published in 1894 by the Indian Hemp Drugs Commission.

It is a detailed 3281 pages long report, a joint British and Indian effort to study the use of cannabis in India. The results (you can see through the link) were reasonably positive.

However, India is a signatory to the following conventions as of today.

#A – The UN Single Convention on Narcotics Drugs 1961.

#B – The Convention on Psychotropic Substances, 1971.

#C – The Convention on Illicit Traffic in Narcotic Drugs and Psychotropic Substances, 1988.

In fact, in the 1960s, with the adoption of the UN single convention on narcotic drugs, the US campaigned for worldwide laws against the use of all drugs like cannabis.

Until 1985, India could withstand the pressure of the US for making use of cannabis illegal.

However, with increased pressure from the US in the 1980s, the Rajiv Gandhi government, in 1985, came up with the NDPS Act, 1985, to bring stringent control over the use of cannabis and other such drugs in India.

Though the Rajiv Gandhi government faced quite a lot of criticism for the enactment of the NDPS Act, the Government used the Gateway Drug Theory as a shield and reason to bring the act into force.

However, the theory has been scientifically disproven and disregarded in countries like Canada and Portugal, where the use of cannabis has been legalized across sectors.

Slowly, Hemp industries in India are popping up

There are various laws in India for the usage of hemp in industries like for textile. It is known to generate livelihood for a good percentage of farmers in the country.

The Indian government is known to be encouraging steps relating to the use of industrial hemp under the state legislature while promoting the growth of and cultivation of hemp.

This license that the government of Uttarakhand has issued thus ensures that hemp can now be used in the making of medicines, textiles, food items, paper and also building materials.

It has been estimated that annual revenues from hemp textiles will equal up to 240 crores INR while the farmers cultivating it will earn approximately 1 lakh rupees in a year from its sales.

Other state governments and the center should take cue from such steps and don what needs to be done!

NDPS Act, 1985, has many loopholes that need to be plugged. Treating cannabis and hemp at par with other harmful and lethal chemicals is arbitrary, unscientific, and unreasonable.

Therefore, decriminalizing the use of cannabis and raising awareness about its medicinal, industrial, ecological, economic, and other benefits is critical.

It’s time we moved beyond political and economic obligations and do what is right!