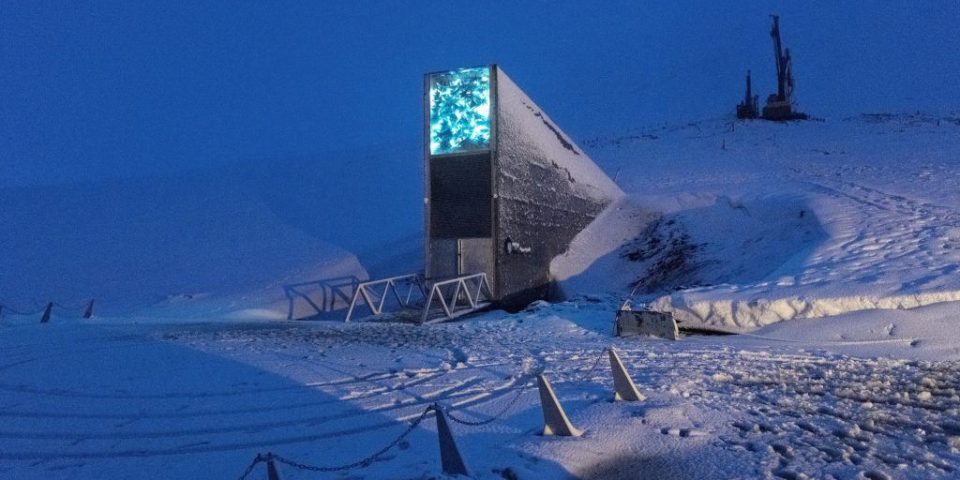 Considering its location and security details, it is the perfect backdrop for a James Bond movie; the seeds are preserved deep inside the mountain near the North Pole. The vault is designed to survive any global catastrophe- nuclear war, gene modification or gene pollution. It is the location of an abandoned coal mine that is nearly 135 meters above the fjord below-so it is safe from rising sea waters should global warming cause them to increase.

The agricultural revolution is thirteen thousand years old, and the good news is that we’ve already started banking our grains. That’s right – far from any conflict areas, and deep in the Arctic Circle, is the Svalbard Global Seed Vault. It’s here that scientists are preserving the genetics of many species against global catastrophe – including cannabis.

Being just one thousand kilometers from the North Pole, it’s a location that scientists hope will be less affected by the effects of climate change and natural disasters.  As a further precaution, the seed vault is buried in the side of a mountain at an altitude where rising seas can’t reach, even if the entire world’s ice should melt.

The good news for cannabis consumers is that in addition to thousands of varieties of rice, spelt, and wheat, some of the underlying genetics of many prominent cannabis chemovars are also safely secured in the Arctic permafrost.

The searchable database on their site shows sixty separate deposits of cannabis seeds, each averaging several hundred each. The vault even includes seed deposits from North Korea—a country with a surprisingly long relationship with the hemp plant. Legalization is unlikely to be on the mind of Kim Jong-un. But still, his country deposited five hundred seeds of a Cannabis Sativa landrace cultivar into the seed bank.

While the Svalbard Global Seed Vault virtually assures the preservation of seeds in the event of an apocalypse, many other seed banks exist around the globe, where growers can purchase their favorite genetics. In such places, passionate breeders and sellers store the genetics of many thousands of cannabis cultivars in conditions suited to their long-term preservation. While these seed banks may not guarantee the survival of the genetics in the event of a cataclysm, they remain sealed from air, and devoid of exposure to heat, light, and humidity, to ensure that their ability to germinate remains intact for many years.

Why Should Consumers Care About Preserving Cannabis Genetics?

Many cannabis consumers shy away from ancient varieties of cannabis. Instead, they focus their energy on those modern cultivars high in THC and CBD. But the fact of the matter is that without the underlying genetics of ancient landrace varieties, none of the modern favorites would be possible.

Why Preserve Landrace Varieties of Cannabis?

Landrace varieties are those that evolved in the wild, sculpted by mother nature to meet the unique demands of the surrounding environment. They grow across much of the globe. They’re found anywhere from the sides of African mountains to the arid, rocky, soils across Central Asia.

Preserving them may well be the best thing that we can do to ensure the viability of the cannabis plant as medicine in the future. Additionally, landrace varieties represent the wild-gene-pool for breeding; and these genes are essential in the development of new cultivars of cannabis. Breeders can’t create copies of existing plants ad infinitum. At some point, creating a copy of a copy exacerbartes flaws. This causes disease, and eventually forces breeders to start over with clean genetics.

Years of prohibition mean that cannabis has never received the scientific study it warrants. Consequently, throughout the decades, breeders focused on high THC content, and almost nothing else. They gave little regard or understanding to the role played by minor plant compounds.

Experts argue that landrace genetics hold the key to exploiting many of these potential benefits. One example includes the above-average content of the cannabinoid THCV found in African landrace varieties.

Evidence suggests that THCV may help with appetite suppression, blood sugar regulation for type 2 diabetes, suppression of the symptoms of Alzheimer’s, and stimulation of bone growth. Further, a study published in Nutrition and Diabetes (2013) analyzed the role of THCV on blood sugar levels. Further, the researchers determined that THCV may be a potential treatment of the “obesity-associated glucose intolerance” endemic to much of Western society.

The Ethical Debate Around Seed Vaults

Many landrace seeds come from those passionate souls who venture out into remote locations in far off corners of the globe to track them down. But upon finding a new landrace variety, they often practice something known as seed swapping. Basically, this is where the seed hunters provide native farmers with samples of their seeds – in return for the landrace seeds.

An ethical debate quickly arises out of this transaction. Although it may be an even trade for the locals, the introduction of these new varieties into remote landrace cultivation “muddies the waters” so to speak. The cross pollination that inevitably results can alter the local landraces forever. Not only that – it’s also almost impossible to know which once pure genetics are now tainted by the manipulated varieties.

Accordingly, this fact alone should serve to highlight the need for secure storage of all landrace genetics.

As these founding genetics become more diluted by the alchemy of a globalized society, the act of preserving cannabis genetics becomes markedly more important. It ensures we can hit the reset button should the need arise.

Little wonder that the Svalbard Vault is referred to as the world’s doomsday vault. Interestingly, few people know that India too has its own doomsday vault and that its located in the snowy heights of the Himalayas.

Built jointly by the Defence Institute of High Altitude Research (DIHAR) and the National Bureau of Plant Genetic Resources (NBPGR) in 2010 under the aegis of Defence Research and Development Organisation (DRDO), this permafrost seed bank is the second largest in the world.

It stores over 5,000 seed accessions (one accession consists of a set of seeds of a particular species collected from different geographical and demographic locations). These seeds — apricots, cabbage, carrots, potatoes, radish, tomatoes, barley, rice wheat, etc — have been prioritised for qualities such yield or resistance to temperature, pests or humidity.

Interestingly, the idea for a high altitude seed vault in Ladakh emerged after a mysterious locust invasion devastated the barley crop in the region!

As for why Chang La, the high-altitude mountain pass remains shrouded in snow for about nine months a year and there is little chance of ice-melt damaging the vault. The fact that its well above the sea level and tectonically stable ensures that its protected from ocean flooding, even in the worst case scenarios.

Presently, the only other facility in India for long-term storage of seeds is the one set up by Indian Council of Agricultural Research (ICAR) New Delhi but it generates an enormous electricity bill thanks to the energy demands of cryopreservation.

Furthermore, there is no village within a periphery of 30 km from the pass, thanks to low oxygen and bone-chilling temperatures in the winters. However, the Leh airport lies 75 km away. Thus, it is a remote location that is nevertheless accessible to both Indian scientist and the armed forces.

Interestingly, the Chang La seed vault’s sealed ‘black box’ design prevents disputes over intellectual property rights. According to this arrangement, the vault does not claim ownership over the deposited samples. Thus, the ownership remains with the depositor, who has the sole right of access to the respective samples in the seed vault.

With the aim of rivalling the Svalbard Seed Vault, India has made storing of viable seeds at Chang La free of cost for all government departments and research organisations. It also plans to open the facility to the international scientific community but for that, it will have to install a high-tech cooling system for 15-20 days when the temperature at the mountain pass peaks to -4 degrees.

So, even though the legalisation of marijuana is crawling at a snail’s pace, you can be assured of its survival in the future.