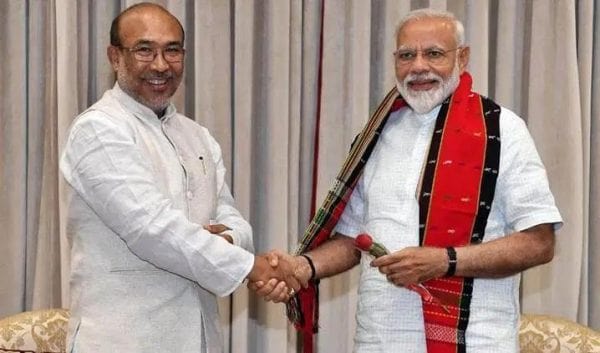 Will weed-growing become legal in Manipur? The world is now finally opening up on Cannabis/Ganja/Bhang however it is unfortunate that most of our Indian citizens are still unawareness about this miracle plant. Citizens are stuck in a limbo whether to consider it sacred or illegal. A fight between whether it should be an Elixir or Venom.

Manipur Chief Minister N Biren Singh said that his government is planning to legalise Cannabis solely for medicinal and industrial purposes. He said this during a press conference held Saturday to announce a new program under the ‘Start-up Manipur’ scheme.

He divulged that legalisation of Cannabis is one of the ideas being considered to help boost the revenue generation of the state.

“Our revenue must be strong. Moreover, Cannabis grows in the wild abundantly in Manipur and this can be used for extraction of hemp oil which is known for its medicinal property”, Singh said.

Pointing out that other states like Arunachal Pradesh, Uttar Pradesh, and Uttarakhand have already legalized Cannabis for medicinal purposes, the Chief Minister appealed to the people to extend their co-operation. Singh also said that the growth rate of Gross State Domestic Product (GSDP) has doubled from 4 percent in 2016-17 to 8 percent in 2018-19.

He said that the state-owned tax revenue has sharply increased from 587 crores in 2016-17 to above 1000 crores in 2018-19. “The result speaks for itself that with the advent of the present government there is economic growth in the state,” he added. He added that with the current pace of development and growth, Manipur would transform into an advanced state. He also expressed confidence that the GSDP will reach 10 percent in the near future.

“Once a bandh, blockade stricken region has been completely transformed to a region of economic growth,” Singh added.

The objective of ‘Stand-up Manipur’ scheme is to provide soft loans to SC, ST, OBC, Minority entrepreneurs of the state.

It is interesting to note that the country’s laws surrounding Cannabis/Hemp/Marijuana have been looser than that of America’s for the past few decades.

India’s Narcotic Drugs & Psychotropic Substances Act (NDPS) of 1985 allows state governments the freedom to establish their own policies in terms of commercial cultivation. That is, “as long as they provide verifiable scientific and operational evidence that hemp cultivated shall not be diverted for misuse.”

The Delhi High Court will announce their next judgment on November 02, 2019.

Is It Globally Legal?

Where Do India Stand?

BOHECO: One of the first players in the Indian market, working primarily with Hemp fiber to make various products like clothing, accessories, commercial Hemp Fabric, etc. They have recently ventured out into Hemp protein & Hemp seeds.

Health Horizons: This Delhi based company has taken into the consumable side of the industry. They are dominating the market with products like Hemp Seeds, Hemp Oil & Hemp protein along with a plethora of non-hemp eco-friendly & healthy products.

Its Hemp:  A consolidated range of all Hemp products available in the Indian market and are India’s First Hemp Focused marketplace. With individuals, manufacturers, distributors, and major brands selling on their platform they will be the go-to place for shopping Hemp. They also run an awareness drive to promote education & adoption of Hemp products and break unwanted myths about the plant.

Cannabis or you can say hemp, bhang, ganja, weed, marijuana or dope; go with any name you wish to but there are so many truths and lie, myths and reality beyond this word that you all should know. Especially in our beloved ganja growing country India, from where it is believed cannabis spread throughout the world and still we don’t know much about cannabis now.  Do you think it’s our fault that we all don’t know much about cannabis? Partially it is but in majorly it is not our fault,  in 1985 cannabis got illegalized in India under international pressure and later on with time, people started to seeing cannabis as a drug that can destroy person’s  life, though it was still the same plant which we used as medicine in past. It was due to the games played by system which made you all believe that cannabis is destroyer rather than savior.

We all can see that image of cannabis in India is not good as of now. We all fear that if our parents or society caught us smoking cannabis then we will be thought of as wasted whereas the same society is accepting the alcohol and willingly share glasses while on social gatherings. It is medically proved that marijuana is much safer than alcohol then what is the reason that there is a hoax about smoking weed and getting wasted? Why there is such a taboo behind ganja? It’s because lack of awareness and misleading knowledge that passed in past regarding this plant. We are here to spread awareness and clear the air about marijuana in public.

Cannabis legalizing is becoming very hot topic in western countries. In fact many states and countries have legalized marijuana too; some has allowed both medicinal and recreational use of marijuana whereas some only allowed the use of medicinal marijuana. If all those states in west are legalizing marijuana then why India is waiting for its own heritage? This is the question that should arise in every citizen of India not only because you smoke cannabis but for the betterment of our country too. Here are some of the reasons why cannabis should be legalized in India:

Medicinal use:  There has been lot of medical research on the cannabis lately and which explains its effect with our body and how it can be used medically for betterment of our health. Cannabidiol is a popular natural remedy used for many common ailments. Better known as CBD, it is one of over 100 chemical compounds known as cannabinoids found in the cannabis or marijuana plant, Cannabis sativa. Here are some of the conditions where Medical Cannabis Oil can help:

The data above gave you all the brief information on benefits of legalizing this magical plant. The journey to the legalizing of weed is not easy as it sounds due to various factors from political to social issues. The legalizing can be only done by spreading awareness and make people understand the benefits of this plant which is mentioned in Veds as one of the five major plant. Right knowledge leads to the right belief, we will spread the right knowledge regarding this plant and with your belief on the right knowledge we change and fight the system. We all have to come together and stand for spreading the truth and clearing the myths regarding our beloved ganja.